It’s the debate of the century. Two historic brands going head to head to please you, the bullet journal enthusiast. This is The Ultimate Showdown.

DISCLAIMER: This post contains some affiliate links. It won’t make a difference to your purchase (should you choose to buy that specific product) but I’ll earn a small commission from the sale. You’re totally free to use different links though!

Leuchtturm 1917, a German stationery producer since, you guessed it, 1917, boasts bespoke notebooks with astounding paper quality. The brand blew up recently, when Ryder Carroll, the founder of the bullet journal system, partnered with LT to launch customized notebooks specifically adapted to this system.

Moleskine, a brand wildly popular with writers, artists and collectors alike, came into existence 80 years later, in 1997. It is strongly associated with the Classics, drawing inspiration from the likes of Van Gogh and Hemingway. Today, it is in practically every stationery store worldwide, and is the most commonly used “alternative” to the LT1917.

But how well do the brands really compare? I’ve had the privilege of owning and playing with equivalent notebooks from both brands, and I’m here to tell you the bare truth, and nothing but the truth.

I’ve used the regular LT1917 and the Bullet Journal Edition, both in size medium with a hard cover and dotted pages. However, to make this a fair comparison, I will only talk about the regular, non-BuJo-y edition.

The Leuchtturm1917 Medium dotted notebook comes with 249 numbered pages (that is 125 pages, double-sided) with a 0.5 cm dot grid. The journal is thread-bound and lays completely flat. The inside of the back cover has an expandable pocket, and the size is exactly A5 (14.5 cm X 21.0 cm).

The Moleskine Large Dotted Notebook comes with 192 pages (that is 81 pages, double-sided), also with a 0.5 cm dot grid. Although they offer hard cover options, I own a soft cover, Classic Collection notebook. Perhaps due to the cover being soft, I’ve noticed that it doesn’t stay completely flat when opened. It comes with an expandable back pocket as well, but the width of the pages is 13.0 cm, making it slightly smaller than a regular A5 notebook. At this point, it is obvious that the Leuchtturm is made for longevity (way more pages), and a decent amount of wear (large, hard cover). The Moleskine, on the other hand, has been crafted for portability (smaller, fewer pages) and unstructured use (no page numbers).

The LT1917 and the Moleskine are both premium notebooks, which means they are quite up there in price, as far as plain notebooks go. So it’s always nice to have a few extras, or more bang for your buck. Here are a the extra features that each notebook comes with.

The Leuchtturm has a couple of promo booklets, one with similar products that you might find useful, and the other telling you about the history of the company. It also comes with a little thank you card, which I think is really nice to have as a buyer. It makes the purchase feel a little more personal, and definitely makes me want to go back to their brand. The best extra, however, is the sheet of labels. It comes with three front cover labels and three archiving labels. If you’re like me, you know that labels make everything alright in the world! This definitely gives Leuchtturm some bonus points! 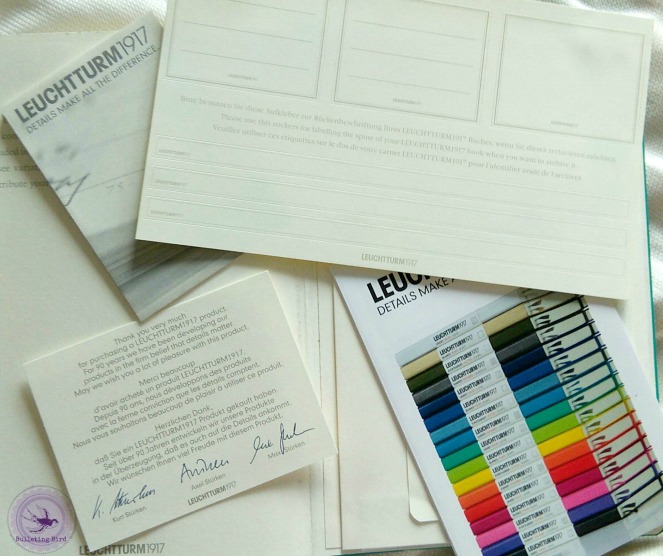 The Moleskine comes with a little booklet about the history of the company, which again is a nice little read. It also comes with a quality control card. As a buyer, this is actually really crucial to me. Often when it comes to buying from big brands, the quality of product varies between batches. I’ve found this to be a problem with a lot of journaling supplies (though I won’t shame any companies here…yet). So it is nice to know that my particular notebook has been thoroughly checked against a standard of production. Thus, Moleskine also gets brownie points! Plus, the cover slip can be folded around and made into a hanging sign thingy. I think that’s quite nifty – spending three years in Bristol has totally made me pro-recycling, and this definitely appeals to the green part of my brain.

Based on the extras alone, the Leuchtturm seems to expect a recurring buyer (hence the archive labels), whereas the Moleskine expects an exclusive, one-off purchase (hence the excellent quality control).

Alright, I know you’re getting antsy to find out which one works better in realistic terms, so I bring to you the ultimate pen test.

I tested one page of each notebook for feathering, bleed through and ghosting (which is when you can see a shadow of the writing on the other side of the page). Black ink is notorious for all of the above, and so I tested four black pens:

And this is what it looked like. To the left, you see the front and back of the Leuchtturm test page, and to the right is the Moleskine test page. Now to the pen test.

The first and most obvious difference is that, due to its narrower pages, the Moleskine is definitely not suited for brush lettering with a larger brush pen like the Tombow ABT. However, I get that brush lettering isn’t everyone’s jam , so let’s just call this an observation, as opposed to a comparison.

As I’m sure you can tell from the picture, the Leuchtturm definitely has a higher page density (about 80 gsm) than the Moleskine.

It is ridiculously difficult to scout out the actual density of the Moleskine paper, but according to Steve DeLong of A dog’s garden of versus, it is most likely close to 71 gsm . *By the way, Steve’s post is bloody thorough and you should definitely go check it out because oh my gosh does he know his measurements.

Back to the point, although both notebooks boast ink-proof paper, it is pretty obvious that one of these (cough Moleskine cough) is a little bit less ink-proof than the other.

However, I’m nothing if not a scientist, and a sample size of two does not a comparison make. So, of course, I put these two pages through one more agonizing, soul-crushing test: the Stabilo highlighters.

Feeling the pastel love! I’m actually seriously addicted to these @stabilo highlighters, and today felt like a purple kind of day. What colour should tomorrow be?? 💜

They make for some amazing flatlays, and create beautiful pastel accents full of unicorns and baby bunnies across your page, right? Right? WRONG. These are the Annabelle doll of pastel highlighters. Oh they look amazing when you use them, with their perfectly pigmented, non-fluorescent yet bright ink, but the second you turn your back (or your page)?

They will bleed like an unsuspecting middle-school cheerleader at the top of a pyramid wearing a short white skirt and cute, over-priced underwear.

Oh you thought I was done Stabilo shaming? OH no. These highlighters are so overly saturated (and by that I mean wet), they will warp your page like the USS Enterprise when the USS Vengeance is on its tail.

Stabilo, I love you I really do, but I don’t need your highlighters to dissolve through my notes, the tears do the job well enough.

Right, rant over. I tested all 4 of the pastel Stabilo Boss highlighters on both test pages, and the results were strangely surprising! Again the Leuchtturm is on the left (just in case you didn’t notice the page number). The column to your left is single stroke swatches, and on the right are three strokes (because who gets the edges straight on the first or second stroke?). First off, the highlighters obviously warped the Moleskine to a larger extent, and I totally expected that because the paper isn’t as heavy as the Leuchtturm paper (read: density!). Surprisingly, however, the ink didn’t bleed through quite as much on the Moleskine! Obviously the three strokes bled through both, but if you look at the first column (on your right in the bottom images), you’ll see that they Leuchtturm showed a lot more bleed, while the Moleskine showed barely any!

Now I have a couple of theories about why this might have happened. The first one is that, since the Moleskine paper is darker, it might just be an illusion – kind of like how black looks darker against white than it does against grey. The second theory, and I’m leaning more towards this one, has to do with the texture.

I noticed while using the felt tip pens on the Moleskine paper, that it felt a lot smoother – almost like writing on wax paper. While the words didn’t smudge off or anything, the paper definitely had a lot less tooth (texture) than the paper in the Leuchtturm, almost as if it had a layer of butter on. Get your tinfoil hats on, y’all, cause I think that Moleskine coat their paper with some form of waxy, hydrophobic sealant that makes it relatively bleed-proof!

Right so now that we’ve tested out all the hard stuff, let’s talk about the more basic differences between the two notebooks.

The first and biggest difference is that the Leuchtturm 1917 comes with not one, but two bookmarks. The Moleskine, by contrast, comes with only one (rather flimsy looking) bookmark.

That being said, the Leuchtturm also comes with a few other extras that the Moleskine doesn’t have. It has three pre-printed index pages (in addition to the 249), has page numbers (to make indexing possible) and also has eight perforated pages at the back. Now I haven’t had much use for the latter, I’m not a huge fan of ripping paper out of a notebook, but they make for amazing letter stock!

One thing I haven’t mentioned so far is the availability and price of each notebook. The Leuchtturm 1917 and the Moleskine soft cover retail at very similar prices online, however the Moleskine hard cover option is a little bit more expensive. While the Leuchtturm is more affordable for the hard cover version, it is (to date) very difficult to find in stores, and so you’re almost certainly paying the difference in shipping costs.

So finally, to sum up, here’s a table. We all love tables!

Whew! That was a long one! If you’ve made it through the entire post, I actually truly love you.

Your Homework: Which notebooks have you tried, and which ones work best for you and your journal?

DISCLAIMER 2: This post has not been sponsored by any of the brands mentioned (I wish!). All products have been purchased by me (and my food money) and everything I’ve said on here is 100% my true personal opinion. This is not intended to harm any brand, but is simply a consumer’s review.

Thank you ever so much for reading this, and please feel free to pass this post along and help a confused soul out!

P.S.: Do you want free downloadable art and stickers and planner inserts delivered straight to your inbox every month? Sign up to my mailing list right now! 100% spam-free I promise. I will only e-mail you once a month! 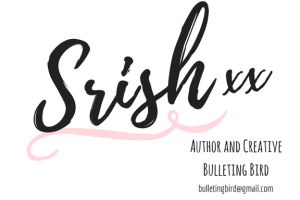 Bulleting Bird is a community of incredible creatives who work every day to live better fulfilled, more creative and productive lives! This is a platform that promotes self growth, and encourages everyone to live life on their own terms. 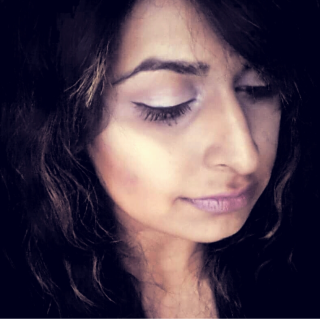 I'm a self-taught freelance artist and bullet journal enthusiast, combining my creative and planning skills to help you get your life whipped into shape!

Or, make a monthly pledge!